At the Revival Bar on Friday, January 6th Mauve will be performing original songs, and covers, as part of the Landmark Showcase Festival in front of fans and music industry representatives. 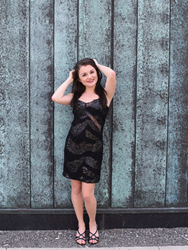 Mauve has a vibrant, lively and energetic approach to her music — come see her perform at the Landmark Showcase Festival.

Mauve is a rising star in the Toronto-area music community who has been chosen to perform this Friday, January 6th as part of the Landmark Showcase Festival at Revival Bar in Toronto.

With a vibrant, lively and energetic approach to music, she blends a number of musical inspirations to put a new spin on the Pop genre, including R&B, Jazz and EDM, to come up with her own, unique sound.

The Landmark Showcase Festival offers Independent artists the opportunity to play and showcase in the best mid-size venues in North America. At the event, Mauve will be performing in front of her fans, along with music industry representatives who will be there to choose the best artists to win music development grants offered by Landmark.

From a very young age, Mauve was captivated by the performing arts, with a passion to incorporate an artistic expression in everything she touches. Having grown up seeing live musicals in Toronto, Mauve is driven to emulate the greatness and creativity she has seen in the performers on stage.

To attend the Landmark Showcase Festival to see Mauve and other performers, tickets can be purchased in advance HERE.

Recently, Mauve also reached #8 on the Radio Indie Alliance, Kingston Q108. The ranking can be seen HERE. Mauve was also chosen this past summer to compete at the 2016 CNE Rising Star Talent Competition where she received feedback that she is a ‘natural performer’.

To see an advance look at the type of performance Mauve will be doing at the Landmark Showcase Festival on January 6th, check out her cover version of Runnin’ (Lose It All) by Naughty Boy found HERE.